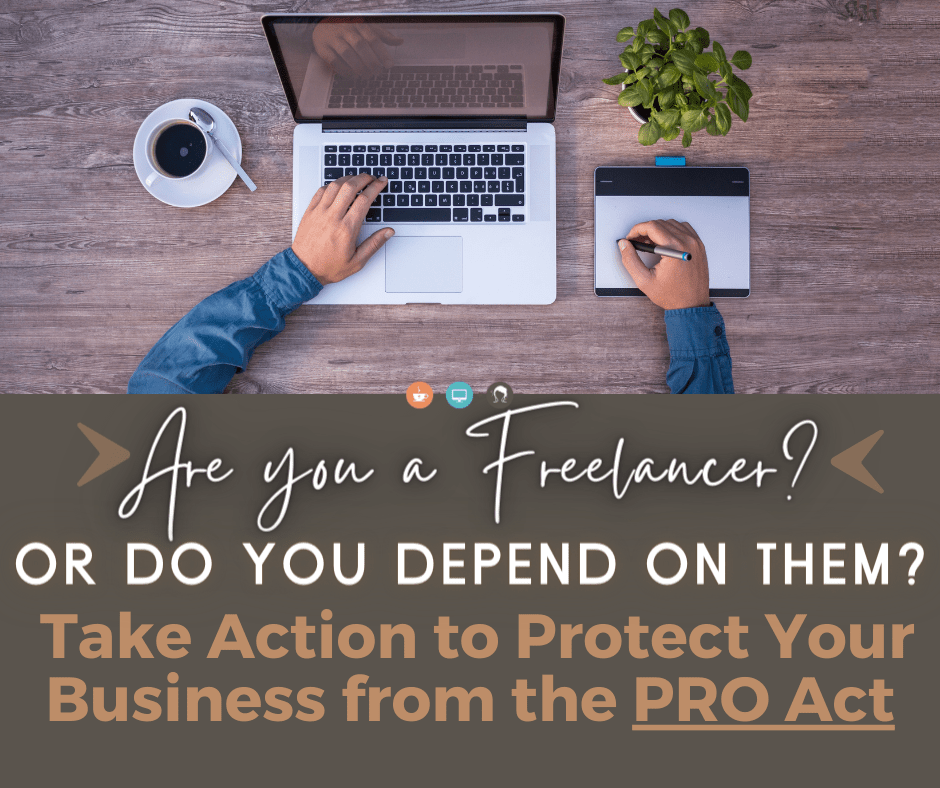 Are You a Freelancer or Do You Depend on Them? Take Action to Protect Your Business Relationships from the PRO Act

As busy entrepreneurs, freelance professionals, and parents, it’s easy to lose track of all the potential legislation pending in Washington. That’s especially true right now, with school closures and pandemic-related restrictions forcing many of us to rethink our business models.

But, a bill called the PRO Act is winding its way through the legislative process and, if passed, could have severe repercussions for freelance professionals and the small businesses that depend on them.

Whether you are a freelance professional or you hire them, this legislation could affect your business model. If it becomes a law, the PRO Act could limit job opportunities for mothers, retirees, and college students who depend on the freedom and flexibility that comes with contract work. And, the new rules will make it more difficult for small businesses to find the flexible, dedicated, and professional support that makes it possible for them to thrive.

In this blog, we’ll tell you more about the bill and how you can take action.

What is the PRO Act?

It’s the most comprehensive labor relations legislation since the National Labor Relations Act (NLRA) of 1947. The bill contains a variety of provisions that affect contractor workers and employers. (Here’s a summary from the U.S. Chamber of Commerce.)

How the Bill Affects Contract Workers

Most concerning, it requires workers who are now classified as independent contractors to be treated as employees who are free to form a union. While many freelancers are likely not interested in starting a union, the prospect of unionization and the requirements to treat freelancers as employees could have serious consequences for freelancers and the businesses that hire them.

Currently, independent contractors are exempt from labor laws and can’t form a union to bargain with an employer. If enacted, the definition of “employee” would expand to the point that it endangers freelance professionals’ livelihood.

Work is likely to be restructured well before workers can even consider organizing. According to Michael LeRoy, an expert in labor law at the University of Illinois Urbana-Champaign, by encouraging businesses to circumvent the law in two ways.

First, the law would incent some employers to automate jobs that can be done remotely.

More concerning is that businesses would be forced to avoid working directly with contractors, who they’d have to treat as employees. The most likely way they’d do this is by using an agency, who serves as an employer for the contract employee.

For example, when a small business owner decides to hire a freelance virtual assistant or social media manager, the owner will turn to an agency to avoid having an employee on the books. The agency would serve as the “employer” and charge a fee to both the business and the freelancer.

The net effect will be to reduce the freelance professional’s negotiating power, raise prices for small businesses, and reduce the contractor’s income because they are now sharing their fees with an intermediary. It’s hard to see any winners, beyond the agency, in this scenario.

What Problem is the PRO Act Trying to Solve?

Sometimes companies misclassify employees as independent contractors to avoid costs associated with having employees. In many cases, these workers function as full-time employees for the business. But, because they aren’t considered employees, the employer does not pay the associated costs, such as unemployment insurance premiums and payroll taxes.

While we can understand the motivation to change that dynamic, this bill goes about it the wrong way.

This perspective reflects our experience as well. We’ve worked with thousands of employers seeking mom professionals and mothers looking for meaningful work that lets them show up for their families on their own terms through HireMyMom.com. In many cases, a contractual relationship is the best scenario for all parties. This law will harm both sides of this equation.

In fact, this bill could disproportionately affect our job seekers–especially the virtual assistants, copywriters, project managers, bookkeepers, and social media managers, who have successfully launched businesses and are thriving as independent contractors.

What’s Happening with the PRO Act

On March 9, the U.S. House of Representatives passed the PRO Act. The Senate can now choose to consider the legislation. President Joe Biden has voiced support for the bill becoming law.

The PRO Act has a long history. It was initially introduced in May 2019 and failed. In May of 2020, it passed the U.S. House of Representatives, but the Senate did not pick it up. Now that Democrats control both the legislative and executive branches of government, the bill has better chances of moving forward.

Reach out to your elected representatives and let your voice be heard.

Let your representatives know that you depend on the freelance economy and want to ensure it isn’t negatively impacted by the PRO Act.